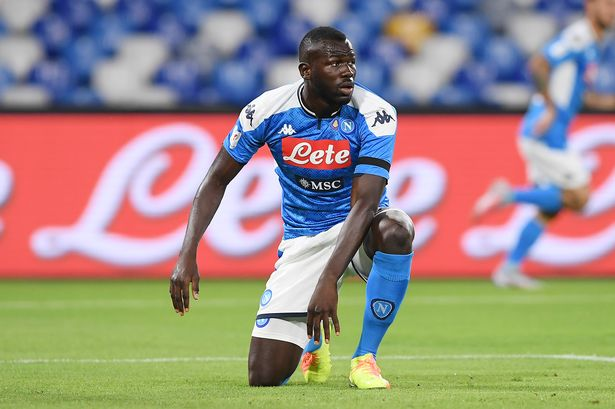 Premier League champions Liverpool have been told the amount required to sign Napoli defender Kalidou Koulibaly ahead of the resumption of the transfer window next year. The Reds want to sign the 29-year-old centre back according to Liverpool Echo.

Koulibaly has emerged as a defensive target for Liverpool in recent weeks due to the various injuries to the first team defenders at Anfield.

The Senegalese international had previously been linked with clubs like fellow Premier League sides Manchester United and Manchester City. Italian Serie A giants Juventus,German Bundesliga outfit Bayern Munich and Spanish La Liga side Barcelona have also been linked with the player in the past transfer windows.

The aforementioned publication from the stables of Liverpool Echo disclosed that the Reds want to pay €60m for Koulibaly as they try to limit the effect of the serious knee injury suffered by Virgil Van Dijk at the end of last month. The Dutchman could miss up to nine months as a result of the injury.

Liverpoolwon’t be without three of their first-choice defenders for the upcoming Leicester City game as manager Jurgen Klopp continues to battle serious defensive issues. The Redswill miss the services of Virgil Van Dijk, Joe Gomez and Trent Alexander-Arnold for the visit of Leicester City. The Foxes are the league leaders ahead of the latest set of Premier League games this weekend.

Leicester City have 18 points from eight games, and they are two points and two places ahead of the Reds on the league table. Liverpool have won five, drawn twoand lost one of their eight games in the Premier League. The 2019 Champions League winners have 17 points from those eight games, the same point tally as North London giants Tottenham Hotspur who are in second place. Spurs have a better goal difference than Liverpool.