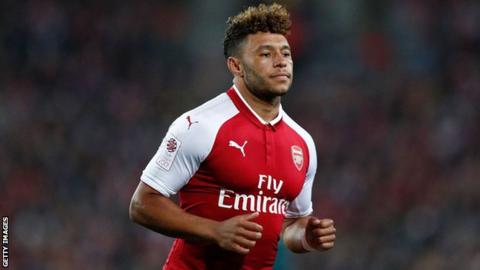 Arsenal manager Arsene Wenger has confirmed that the club will not listen to offers for midfielder Alex Oxlade-Chamberlain despite the constant speculation over his future.

The England international has emerged as a top target for Liverpool in recent weeks with Jurgen Klopp looking to recruit a new central midfielder to his ranks.

Oxlade-Chamberlain had played in several positions for Arsenal including right wing-back, but he sees himself in the mould of Steven Gerrard at the heart of the club’s midfield. The Ox currently has just a year left on his existing deal, but Wenger has assured that the attacker would stay regardless of the continuous gossip about his situation.

“Yes. 100%, I expect him to stay. No matter the speculation, he will stay.” Wenger told the press following the Gunners’ 3-1 friendly win over Western Sydney Wanderers on Saturday. Agent Aidy Ward has been in contact with the representatives of a couple of English clubs including Manchester City and Chelsea, but the Gunners remain confident of striking a deal with the assurance of regular playing time next term.

Liverpool boss Jurgen Klopp has maintained his patience in the transfer market this summer, but there has not been any breakthrough in terms of potential signings other than Mohamed Salah and Dominic Solanke. RB Leipzig’s Naby Keita is the prime option to bolster the centre of the park, but the player has himself highlighted that he is in no hurry to leave the Bundesliga outfit, who have qualified for the Champions League via a runners-up finish.

Southampton’s Virgil van Dijk is the other player topping the Reds’ shortlist, but the club have stalled their interest following the Saints’ complaint over an illegal approach for their centre-back. The South Coast club are looking for a package of around £70m or less, they could keep their defender for another season.